In fact, it would seem that they can be quite the opposite. 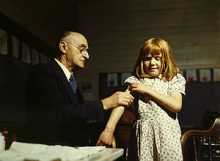 Whether it’s saving our lives during a complicated pregnancy or answering a question about a swallowed penny, doctors and nurses have been quite helpful in my life. My daughter and I will both forever be grateful for the amazing team who saved us when I had preeclamsia and we both were dying during my first and only pregnancy.

But you know what? Doctors are not gods. You do know that they have a history of being wrong, right? From bleeding people to death to even sexually assaulting women to treat “hysteria,” there have been plenty of bad doctors using bad science (or superstition) to treat people. There still are plenty of these people around today.

They do not always know what is best for your child—and, in fact, they can give bad advice. I once had a pediatrician tell me to let me daughter “cry it out” every night even if she puked. She claimed the puke—of a seven month old, mind you, who couldn’t even sit up on her own yet—was a “tactic” to get me to come back, and that she would let her how sons lay in their vomit if it came to that.

Yes, I left her, but now I wish I had reported her, too.

There are also thousands of doctors prescribing meds to children for ADD or ADHD—children as young as four, mind you!—when many experts (and non-experts, like myself) believe the disease to not even be a real one, but a side effect of our unnatural education system that demands children to sit still when they—as the mammals they are—need to move and interact and play to learn.

I recently ran across this article in which a doctor asked his patient’s parents to lie to their own child about a procedure. Really? Has it come to this? If they’re so willing to lie to your child, how about lying to you, as well, for a buck or two? Those Ritalin pushers that come to your pediatrician’s office give him or her big rewards for selling their drugs to you; you might want to keep that in mind.

I will never lie to my child at the request of some doctor—and any doctor who asks me to will no longer be employed by us. Make no mistake; you are paying them for their services and if they are unsatisfactory—and lying to a client is unsatisfactory—you have the right to fire them like you do anyone else. Their job is to act in your best interest (or your child’s), not the drug company’s or their own; the minute they stop is the minute they’re not doing their job.

And the minute you stop listening to your own gut and start following the orders of someone else when it comes to your child, you’re not, either.


Important news that could save your life!


How to Relieve Hot Flashes for Menopausal Women